Ankeny, Iowa – (April 10, 2015) – Dave Thompson, owner of The Urban Grill in Urbandale and D.R.A. Properties L.C., today announce a new restaurant will be coming to The District in Prairie Trail. Planning is underway for the 6,000+ square foot building on Main Street, overlooking Lake Promenade.

Dave Thompson knows how to create a restaurant experience central Iowa diners love. After 13 years working along side Skip Bachman, managing legendary eateries like Skips in Des Moines, Nicks in Clive and the Urban Grille in Urbandale, Dave and his wife Jean now own the Urban Grill. It’s that same family operation and proven brand he will bring to the new location in Ankeny.

“The new restaurant won’t be the same as Urban Grill, but similar,” said Thompson. “We’re well known for our salads and pasta and traditional American menu, but in Prairie Trail, we’ll have more steak and seafood with a twist. We’re excited about the wine bar and the outdoor patio and the event space designed for larger groups, such as rehearsal dinners or business events.”

The new building is just in the first phase of planning and design but Dave and builder Jason Loutsch, of MJProperties, the contractor on the project are excited about the vision for the space.

“The infrastructure has been put in place anticipating this new restaurant,” said Loutsch. “Last summer there were improvements made to the lake and the outdoor firepit was built, just two of the amenities created for people of the entire development to enjoy.”

Part of the outdoor seating area for the new restaurant will be uniquely designed so the bar opens up to the outside overlooking the lake. There will be casual seating on the patio with tables but also sofas and comfy chairs where people can stop by for hor d’oeuvres and a glass of wine.

There is still much to be decided about the new restaurant, including the name! But construction has already begun and the plan is to open by Fall, in time for the holiday season.

“We are excited to make this announcement of another new and local restaurant opening in Prairie Trail,” said Dennis Albaugh, CEO of DRA Properties. “This family owned and operated restaurant is just the kind of business we want to add to Prairie Trail. Dave has an outstanding product and knows how to create an ambiance that will be perfect for families and Ankeny business professionals to enjoy. I am personally looking forward to the first steak!”

Construction in The District at Prairie Trail began in 2012 with Jethro’s Lakeside BBQ restaurant the first to open in the summer of that year. In January 2014, construction started on the Vintage Main building and a year later it is 90% leased. Vintage Main is home to Simpson College Ankeny Campus, Fitness World at Prairie Trail and Fong’s, Pizza restaurant, open in April. Just to the east, construction began in January 2015 on the building known as District II, 55,000 square feet of office and retail space, directly north of Thompson’s new restaurant location.

Building expansion is also robust in the Plaza Shoppes area of Prairie Trail where 7,000+ square feet of retail space is nearing completion. Another local restaurant, The Main Street Café & Bakery, is opening in the new Plaza Shoppes space. It will be within walking distance for residents of Prairie Trail and is on schedule to open later this spring. 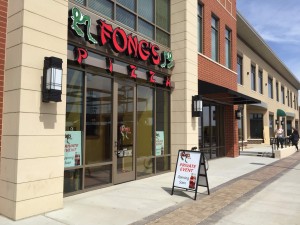